What Is Going On With Hemp & CBD? Is it legal in the US? 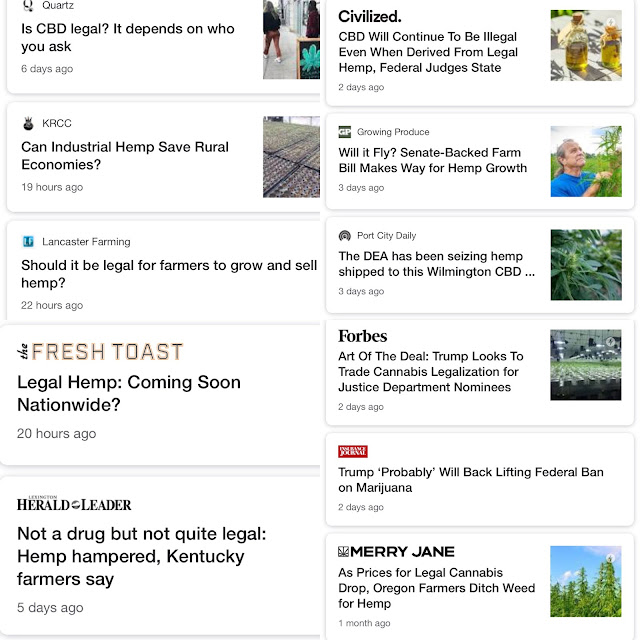 If you Google, “is hemp legal in the US as of today?” you’ll be met with so many “yes, no, maybe’s” that truly uncovering hemp’s official legality, can be confusing to downright impossible if you don’t know where to look!

However, as of Wednesday, June 13, The Senate Agriculture Panel passed the Farm Bill with hemp legalization.

Meaning that YES! Hemp & CBD ARE legal in the US, though I’ve noticed lately that some CBD companies state that they can no longer deliver CBD to Kansas.

This could be because hemp is still technically illegal at the Federal Level....but not by the State’s. I know, it’s confusing!

The national hemp market is currently valued at $688 million with its value only sure to increase since as of Wednesday, June 13, The State Agriculture Committee passed the major Farm Bill by a 20-1 vote & overcame what could have been the “kiss of death” for the US hemp & CBD Industries.

“The draft farm bill, officially known as the Agriculture Improvement Act of 2018, contains more than 1,000 pages and covers everything from farm subsidies and food stamps to trade and rural development policy. Farmer assistance includes commodity payment programs, as well as subsidized crop insurance.

Sen. Chuck Grassley, R-Iowa, cast the sole "no" vote, because his amendment to limit subsidy payments wasn't added to the proposed bill. Grassley wants to tighten the federal payments to focus on family-size farm operations.

Earlier in the panel's meeting, Senate Majority Leader Mitch McConnell, R-Ky., pledged that the full Senate will vote on the entire 2018 farm bill before the July 4 recess. McConnell also said he's "hopeful the House will get to theirs, but it will probably look a little different than ours."

The House failed to pass a farm bill last month due to an immigration squabble among Republicans.

A House vote soon "would give us a chance to get into conference and actually make a law here," said McConnell.

McConnell also made a case during Wednesday's Senate Agriculture Committee meeting for supporting his hemp legalization legislation. McConnell said farmers in his home state of Kentucky and across the nation are interested in an industrial hemp industry.

According to McConnell, hemp farming in Kentucky can help replace some of the revenue from falling tobacco demand.
"I know there are farming communities all over the country who are interested in this," said McConnell. "Mine are particularly interested in it, and the reason for that is — as all of you know — our No. 1 cash crop used to be something that's really not good for you: tobacco.

And that has declined significantly, as it should, given the public health concerns.
In particular, the GOP leader said, "Younger farmers in my state are particularly interested in going in this direction. We have a lot of people in my state who are extremely enthusiastic about the possibilities. As we all know, hemp is very diversified."

As a plant, hemp looks like marijuana, but it contains low levels of THC, the chemical that produces a "high" for pot users. Industrial hemp is used to make everything from apparel, foods and pharmaceuticals to body care products, car dashboards and building materials.

"It's time to figure it out and see where this market will take us," he said. "I think it's an important new development in American agriculture. There's plenty of hemp around; it's just coming from other countries. Why in the world would we want a lot of it to not come from here?"

McConnell's hemp legislation, known as the Hemp Farming Act, is included in the Senate's farm bill and would remove industrial hemp from the list of controlled substances under federal law.

The farm bill is usually renewed every five years, and the current version is set to expire Sept. 30. The previous farm bill, from 2014, relaxed hemp laws and allowed farmers in a handful of states, including Kentucky, to grow the crop as part of research projects.

"I'm proud to support this bill before us today," McConnell told the Agriculture Committee. "It can deliver much-needed certainty for farmers. One way it does so is by protecting crop insurance, a crucial tool for our farmers who face challenges such as natural disasters or inclement weather that can wipe out an entire operation."

McConnell also noted that the draft 2018 farm bill includes funds for water infrastructure investments as well as reforms to support protection of forest lands. He also said it boosts rural communities by expanding high-speed Internet and providing funds to fight the opioid epidemic.

"By any measure, this is a good bill with common-sense proposals to help families and communities," he said.”

Popular posts from this blog

June 02, 2018
ROYAL REVIEW: Alpen Organics 1000mg Extra Strength CBD Tincture Like every product I’ve received from Alpen Organics, my 1000mg Extra Strength CBD Tincture arrived VERY quickly & 100% perfectly intact.  The day it arrived, I’d yet to dose my 1st round of daily CBD, so I began then & there, around 12:30pm. Due to the fact that I do medicate with CBD multiple times daily, my tolerance is high. This particular product is a VERY high dose, which has been absolutely perfect for me since the 1st time medicating with this tincture.  I’ve been medicating with Alpen Organics 1000mg CBD Tincture by putting my desired dose under my tongue & holding it there for 10-15 seconds (recommended use) as well as putting it into my homemade, healthy smoothies, as the tincture is completely tasteless, making it ideal for adding to beverages! ☕️🥤 🌤 Along with a healthy eating style & therapy, starting my days with a sublingual dose (under the tongue) of Alpen Organics 100
26 comments
Read more

January 29, 2019
ROYAL REVIEW: 10mg CBD Hard Candies from Your CBD Store Birmingham Hello & happy Tuesday, Royal Fam! Today, I’ll be reviewing 10mg CBD Hard Candies from Your CBD Store Birmingham. As a Birmingham resident & CBD enthusiast, I must say that this is one of my favorite shops! Not only do I love their products, the service I’ve received has never been less than extremely pleasant, helpful & friendly.  Last weekend while stopping in for some CBD tincture for my hound, Bailey, I saw that Your CBD Store was selling two packs of their 10mg CBD hard candies, so I decided to give them a try. The candies are Your CBD Store’s very own recipe & are made in Florida. They come in about five flavors or so & I decided to give pineapple & cherry a try. These candies from Your CBD Store are some of my favorite CBD candies I've ever tried! Great flavor without that overwhelming “plantlike taste”. I could feel the subtle dose of CBD after about a half hour. My musc
21 comments
Read more

June 16, 2018
Today’s SECRET GIVEAWAY (6/16) Hey there & welcome back, Royal Fam, welcome to today’s SECRET GIVEAWAY! Wondering what today’s PRIZES are? Wondering how YOU could win one? I will happily let you know! This giveaway is of a little something sticky.  Just a little something sticky from one of my personal favorite brands in the smoke accessory game. I’ve got THREE Beamer Smoke  stickers for THREE lucky random winners, Royal Fam! The winner’s sticker will be delivered to YOUR CASTLE with an included, handwritten card from me @princesscbd 💚 . For your chance to be one of the THREE WINNERS, simply:  •Return to the post on my Instagram account mentioning today’s (6/17 or the one on 6/16) SECRET GIVEAWAY. •Like that post.  •Make sure you’re following me & comment “Lion” or “Wavy” on that post to let me know which sticker you’d like & tag 1 friend in that comment. •You CAN enter to win either style sticker by leaving another comment (“Lion
1 comment
Read more